The Ultimate Guide To Dutch Ovens | How To Choose

This Dutch Oven Guide is going to help you discover what a Dutch Oven is, how you can choose the right one, and how you should care for it to make it last a lifetime (plus some best kept secrets).

A Dutch Oven can be one of your most versatile and durable pieces of cookware—allowing you to accomplish anything from braising to boiling to deep- frying and can easily go from stovetop to oven.

Keep reading this guide from Caraway to discover what a Dutch Oven is, how you can choose the right one, and how you should care for it to make it last a lifetime.

What Is a Dutch Oven?

A Dutch Oven is a thick-walled pot supported by protective handles, with a tight-fitting flat lid—the latter being especially important for many of its uses. Dutch Ovens tend to look like regular stock pots but with a wider base and shorter walls. Their design makes it an incredibly versatile piece of cookware.

Traditionally, Dutch Ovens were made of seasoned cast iron. However, cast-iron cookware has its downsides (such as its propensity to rust quickly). For this reason, many Dutch Ovens today use other materials, such as ceramic. To help with heat distribution and cleaning, some Dutch Ovens are even coated in enamel.

Dutch Ovens can range from a teeny ¼-quart to a staggering 13 quarts—each size coming with its own set of uses. A Dutch Oven is great for making stews to feed the whole family, caramelizing onions, or simply searing a piece of meat. 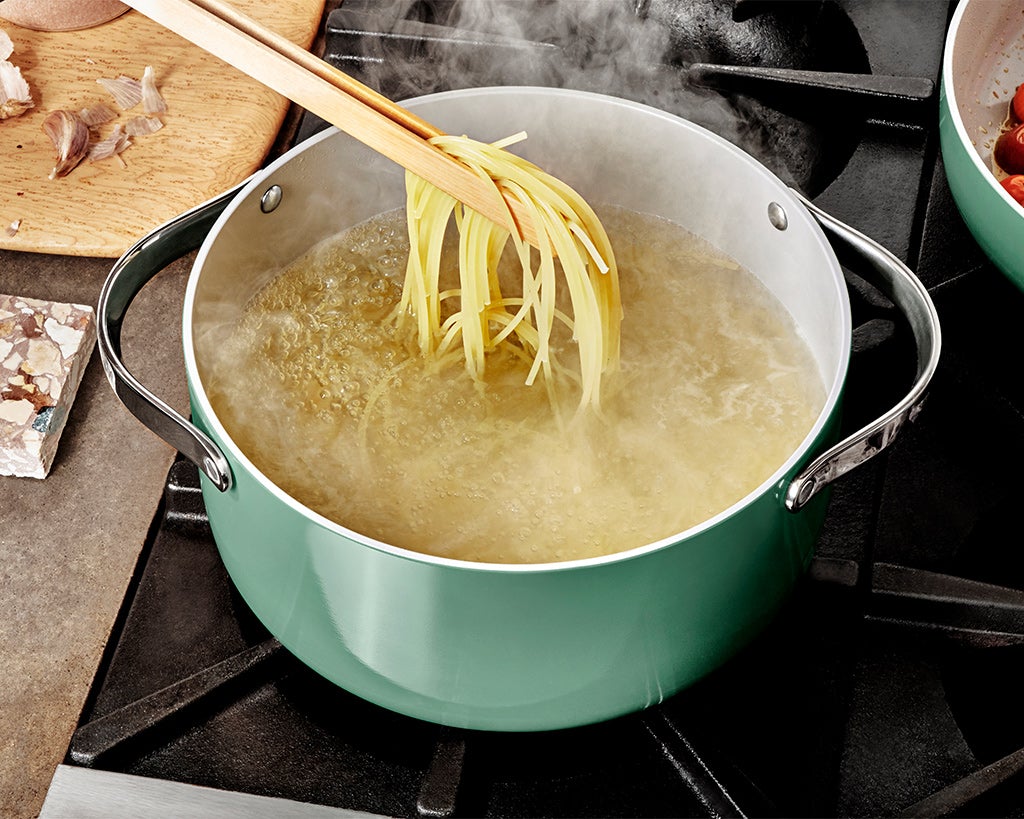 How To Pick the Best Dutch Oven

Because of its versatility and durability, a Dutch Oven can last you a lifetime. For this reason, you want to make sure you buy the right one.

Here are three things to consider when choosing the perfect Dutch Oven for you:

Traditionally, Dutch Ovens were made out of cast iron cookware. During the height of their use in the 18th century, this made Dutch Ovens ideal for cooking on an open flame over a campfire of hot coals—something that was especially useful for American explorers traveling West.

However, cast iron cookware has its downsides. In the first place, it’s incredibly heavy—which is hardly ideal when you have to take it out of the oven. In addition, cast iron has a tendency to rust if not cared for properly, impacting its longevity.

Modern-day Dutch Ovens are made from a variety of materials, such as stainless steel, enameled cast iron, and ceramic, all of which are much more lightweight and easier to clean. Some Dutch Ovens can even use a combination of all three materials for their different parts.

2. Decide If You Want a Coating

If part of the appeal of today’s Dutch Ovens is the variety of colors they come in, then you might want to consider investing in a Dutch Oven with a ceramic coating. This is opposed to a bare cast iron Dutch Oven, which has a tendency to look quite plain.

3. Make Sure It’s the Right Size

The smallest Dutch Oven can be as small as ¼-quarts. While it looks charming, it’s best for making individual-sized portions of your favorite meals. For this reason, it’s not the greatest option if you’re planning to feed more than one person or make leftovers to store in the refrigerator or freezer.

The most popular option is a Dutch Oven that’s five or six quarts. It’s great for cooking large batches of food without being too massive to lift, clean, and store.

On the larger side of the spectrum, you have Dutch Ovens that go all the way up to 10 quarts. If you ever come across one in real life, you’ll realize how big this can actually be.

While they’re perfect for making extra-large batches of our favorite foods, storing them might be a tad bit unrealistic in modern-day kitchens.

How To Use a Dutch Oven

If we could only have one piece of cookware in our kitchens, it would be the Dutch Oven. It’s truly one of the most versatile kitchen tools you can own.

Here are some of the things you can do with it:

A Dutch Oven can be used to bake virtually anything, including your favorite bread.

While its shape won’t allow you to make a dozen blueberry muffins (we’d prefer to use a specialized Bakeware Set for that), there are plenty of baked goods that come out perfectly in a Dutch Oven. For instance, you can make sourdough bread in your Dutch Oven, which guarantees an award-winning crust and fluffy interior.

Aside from baking, you can also use your Dutch Oven for roasting. (Yes, there is a slight difference between the two). Whether it’s a whole chicken, a pot roast, or your favorite root vegetables, these will all come out perfectly in a Dutch Oven.

Instead of investing in a separate slow cooker, you can use your Dutch Oven to make succulent one-pot meals. While it may seem like a slow cooker is different from a Dutch Oven, the two can actually function in much the same way.

A Dutch Oven, when baked at a low temperature—with the lid slightly cracked open—will reach a temperature that’s similar to that of a slow cooker. This should be around 180°F. Of course, the temperature varies with the type of slow cooker you use.

However, unlike with a slow cooker, your food will come out much more tender in a Dutch Oven—whether it’s meat, veggies, or starches.

Everything you can do with a frying pan you can also do with a Dutch Oven. In addition to sautéing—which uses high heat and little oil—you can also sear and pan-fry your food.

All of these techniques require your cookware to go up to a high temperature. With its thick bottom, a Dutch Oven is ideal for getting that desired caramelization on your meats and veggies.

Unless you have a restaurant-grade kitchen, it’s unlikely that you have a deep fryer at home. Thankfully, with a Dutch Oven, you won’t need one.

With its high walls, a Dutch Oven will contain all the oil you need to make french fries, fried chicken, or doughnuts—while preventing any splattering. In the unlikely event that the hot oil gets too hot, you can quickly cover your Dutch Oven with its lid and lower the temperature.

As much as a Dutch Oven is a special piece of cookware, there’s absolutely no reason why you can’t do basic things with it. Boiling water to make pasta is one such example, which speaks to the Dutch Oven’s versatility. In addition, anything that requires a hot liquid—such as soups or even warm cocktails—can be made in a Dutch Oven. 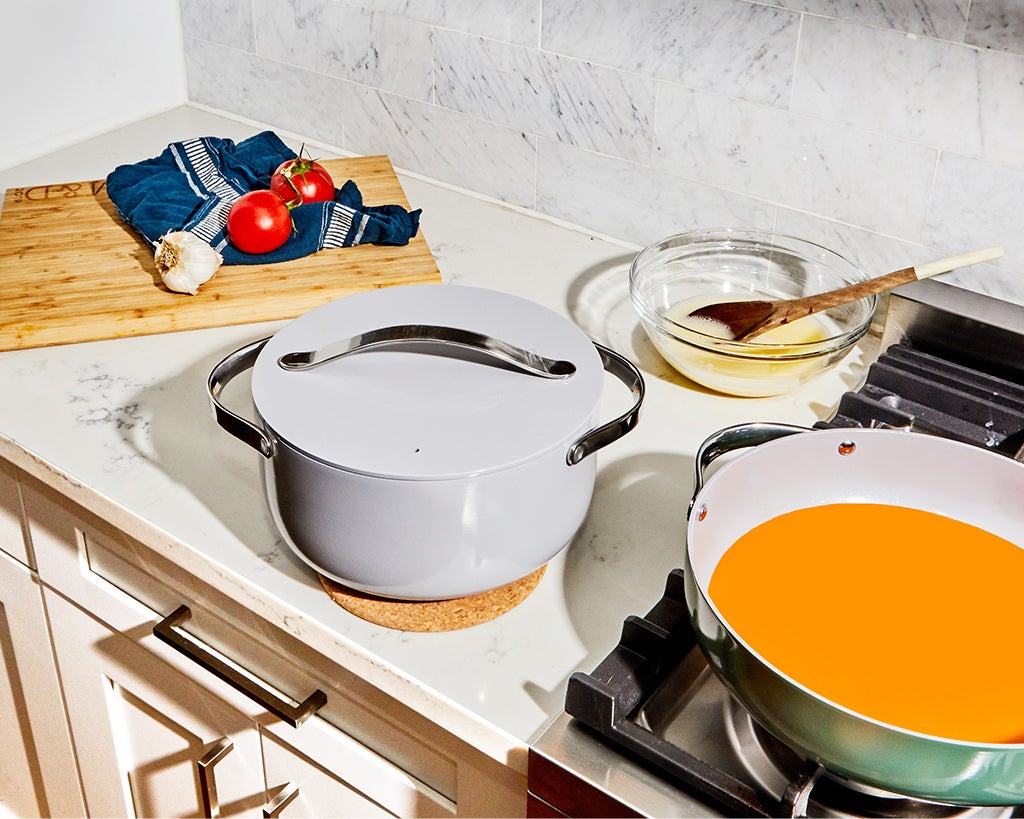 How To Care for a Dutch Oven

As durable as a Dutch Oven is, it’s still important to take good care of it.

This is the proper care for your Dutch Oven:

Your Favorite Piece of Cookware

A Dutch Oven is truly one of the most versatile pieces of cookware that you can own. And if you care for it properly, you can literally own it for a lifetime. To make sure this happens, make sure to invest in the highest-quality Dutch Oven, like our Caraway signature Dutch Oven.

Regular vs. Enameled Cast Iron: How They Compare for Cooking and Cleaning | Washington Post

What's the Difference Between Roasting and Baking? | The Kitchn

In The Kitchen With Nic Scheppard & Jenson Titus of @VeryGayPaint