You likely reach for your kitchen towel more than you realize. Check out the best kitchen towels for drying dishes and learn why it's time to upgrade yours.

Oh, kitchen towels, so helpful yet so underrated. No kitchen is complete without them. They’re stylish, multifunctional, and oh-so easy to use—it just makes sense to keep them close. From wiping up spills to drying fruits and vegetables, there’s no shortage of ways towels are the unsung heroes of any kitchen.

Read on to learn more about the plethora of uses for your kitchen towels (and the best ways to keep them clean)! You’ll never want to be separated from them again.

What Are Kitchen Towels?

A “kitchen towel” is a general term, but yes, they are towels you use in the kitchen. This seems simple enough, but for those who love cooking and baking and spend lots of time in the kitchen, there’s a bit more to it, and knowing the details can really up your game. Seriously, kitchen towels are so helpful they might as well be called kitchen tools.

You’re likely familiar with a few different names: kitchen towels, dish towels, tea towels, and chef towels. They’re all kind of the same, but they’re also all different, you know?

Kitchen towels are, by definition, towels you use in the kitchen. They’re incredibly versatile and intended to be used all over the kitchen for several purposes, making them one of the most useful and most used items to have around. To withstand fairly heavy usage, kitchen towels are generally tougher than regular bath towels and have hemmed edges to give them more strength and durability. The trick is to have a kitchen towel tough enough to handle all the scrubbing and rubbing it will inevitably endure, but also be soft enough to absorb spills and be kind to your hands.

Dish towels - as their name suggests - are used to wash and dry off dishes. Because they’re used on cutlery, plates, and bowls, dish towels should be kept separately from kitchen towels or be clearly differentiated. Even homes with dishwashers can benefit from dish towels; fragile dishes, dishes that aren’t dishwasher safe, fine china and wine glasses, etc. When choosing a dish towel, look for 100% cotton material to maximize softness and absorbency.

Tea Towels are another linen suitable for several tasks but are more often used to serve hot pastries, cover bread baskets, and cover teapots. The best type of Tea Towel will be soft yet sturdy and made from 100% cotton. Tea Towels can serve similar functional purposes to kitchen and dish towels. Still, given they’re typically thinner, you may want to save Tea Towels for table decor and as an added touch to breakfast and lunch setups.

Last but not least, chef towels are the type of towel used in a professional kitchen setting. The stakes, temperatures, and messes are high in a chef’s environment, so this type of towel is extra strong to endure repeated abuse and countless uses. Chef towels will almost always be a plain white color to make it easy to spot bits of food, spices, etc. Remember that as stylish as wearing it over your shoulder may seem, don’t do it! It’s unsanitary and may lead you to develop poor posture, too.

Here are six reasons you should always keep a kitchen towel close by. We’re sure there are many, many more, but we think most of them can fit into one of these seven categories.

1. Drying and Cleaning our Hands

This is the most obvious or common use of a kitchen towel: cleaning and drying our hands.

Whether in the middle of chopping, cooking, or cleaning, having a kitchen towel close by is always a good idea. The kitchen towel - most often stored over the oven door handle - should always be in arms reach, allowing you to dry quickly dry your hands after washing or pat dry between activities. A kitchen towel is also the towel to reach for to wipe your fingers between chopping ingredients or touching sticky handles. For reasons like these, kitchen towels should be washed more often than we probably do; residual food and sauces can develop bacteria… but we’ll dive deeper into how to keep towels clean a little later on.

Pro Tip: Don’t leave your kitchen towel on the counter. Even the cleanest looking counter is covered in tiny particles of leftover food, spices, and spills. A well-designed towel will pick up everything it touches, and you don’t want it picking up any germs hiding on the counter. Further, a towel left on the counter is likely wrinkled and crumpled: this will hinder drying and lead them to develop that dreaded, musty towel smell.

Ok, maybe this is the most obvious use of a kitchen towel; drying up spills, splashes, and other liquids.

Knocked over sauces, leaking containers, splashes from the pan, you name it, and a kitchen towel can handle it. For cleaning spillage, you’ll want your towel to be thick but not coarse; it’s a fine line between strong and durable and a towel that resembles sandpaper. You’ll also want a towel that is washing-machine-friendly because after all the things it’s going to see… it will need that thorough cleaning job.

Pro Tip: Don’t use your kitchen towel to clean up raw eggs or juices from raw meat and fish. Runoff spillage from cutting meat is practically unavoidable, but this is a task for paper towels, not your kitchen towel. Using a kitchen towel to wipe up juices from meat, fish, or eggs increases the risk of cross-contamination and foodborne illnesses. For messes like these, stick to disposable towels or tissue to keep you and your food safe.

Besides drying your hands and countertops, kitchen towels are also a great tool for drying dishes, cutlery, and other utensils.

Thanks to their high absorbency and softness, kitchen towels are perfect for drying dishes and other kitchen items. This is another instance where your towel’s quality is important; a quality towel will be made from 100% cotton and won’t leave any lint behind. Lint is definitely not in the recipe for your grandma’s famous meatloaf.

Kitchen towels' useful drying abilities don’t need to be limited to smaller items like dinner plates and kitchen knives. You can even use kitchen towels to dry cookware like a versatile Sauté Pan. Because of its large size, Sauté Pans are every cook’s go-to for dinner parties. They’re also perfect for stir-fries, dishes with stock, or any occasion where you want to cook multiple ingredients without crowding. If you’ve just used your Sauté Pan to finish a sauce reduction but need it clean and dry to start whipping up a casserole, simply dry your Sauté Pan with a kitchen towel after cleaning and move onto your next delicious dish.

Pro Tip: If you’re going to use a kitchen towel for drying both your hands and dishes, have two and keep them separate. The towel used for drying hands will be coming in contact with who knows what, and we don’t want a less-than-perfectly clean towel being rubbed all over a plate that’s about to have food on it, now do we? Nope. As tempting and convenient it is to double-duty your kitchen towel, don’t!

Not everyone has a salad spinner or other fancy kitchen gizmos to dry our produce with. Good thing a kitchen towel is always nearby, ready to save the day.

Whether you’re airing freshly washed berries, drying off leafy greens, or patting down wet herbs, a soft yet absorbent towel will be best to absorb moisture without damaging the produce. For this use, a Tea Towel will work just as well, if not better, than a kitchen towel because it is slightly thinner and softer.

Pro Tip: Never use your towel to try to clean the sink! The sink is one of the dirtiest places in the home and full of bacteria, germs, and dirt. Kitchen sinks accumulate tiny food particles, which are left to mix with water and residual spills, creating the perfect breeding ground for bacteria. No matter what you see in the sink and as tempting as it may be to wipe it with your towel, don’t.

A good pair of Oven Mitts or Pot Holders are ideal for this task, but kitchen towels will suffice! 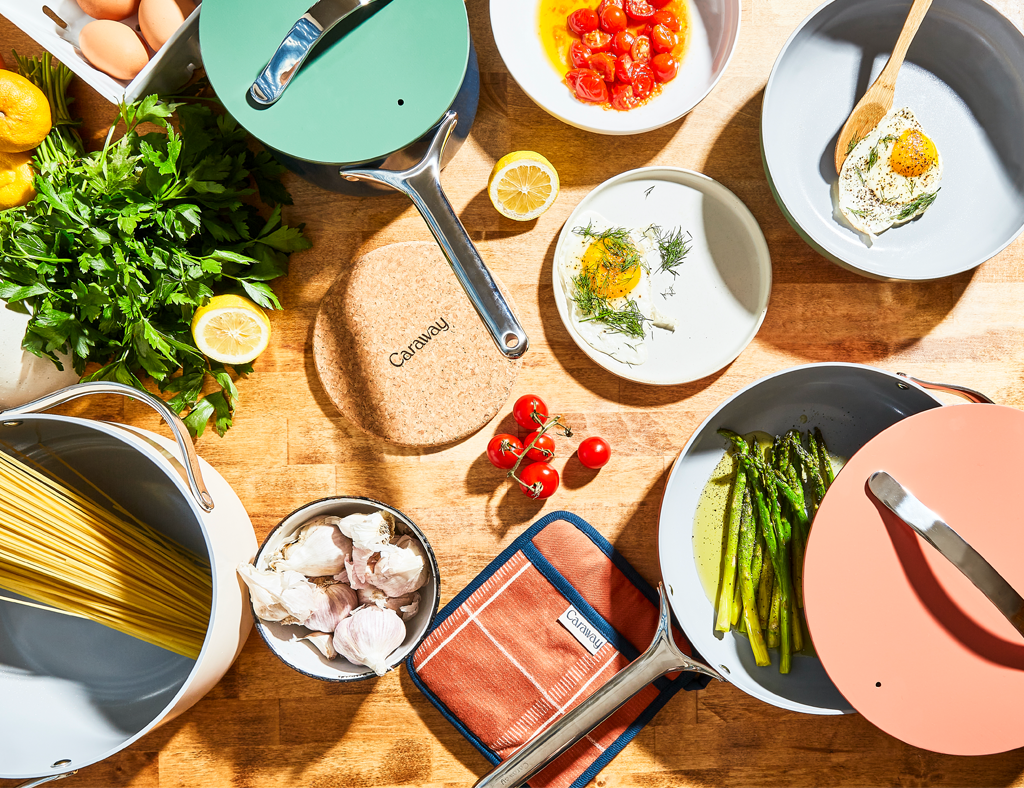 Obviously, kitchen towels aren’t designed for handling hot dishes. When using your towel to grab something hot, try to fold or ‘wrap’ the towel a few times to create some heat-protectant layers between you and the hot dish. As thrill-seeking as testing your fingers’ temperature threshold might be, better safe than sorry - especially if it results in spilled food and burnt fingers :(.

Again, a strategically folded kitchen towel will do the trick when you need it to, but it’s always better to use the proper tools of oven mitts or potholders.

A good set of towels - or any Kitchen Linens, really - are an investment. With proper care, your kitchen towels will last for longer and serve you better.

Now, we’re not just talking about keeping them looking clean, as in spotless and stain-free; we’re talking about actually clean, as in deep cleaned and always fresh. There’s nothing more cringe-worthy than reaching for a clean towel only to discover it’s moist, grimy, and carrying that awful mildew smell. You don’t have to be a top chef to keep your kitchen in tip-top shape, and always having fresh, clean towels are a great place to start. 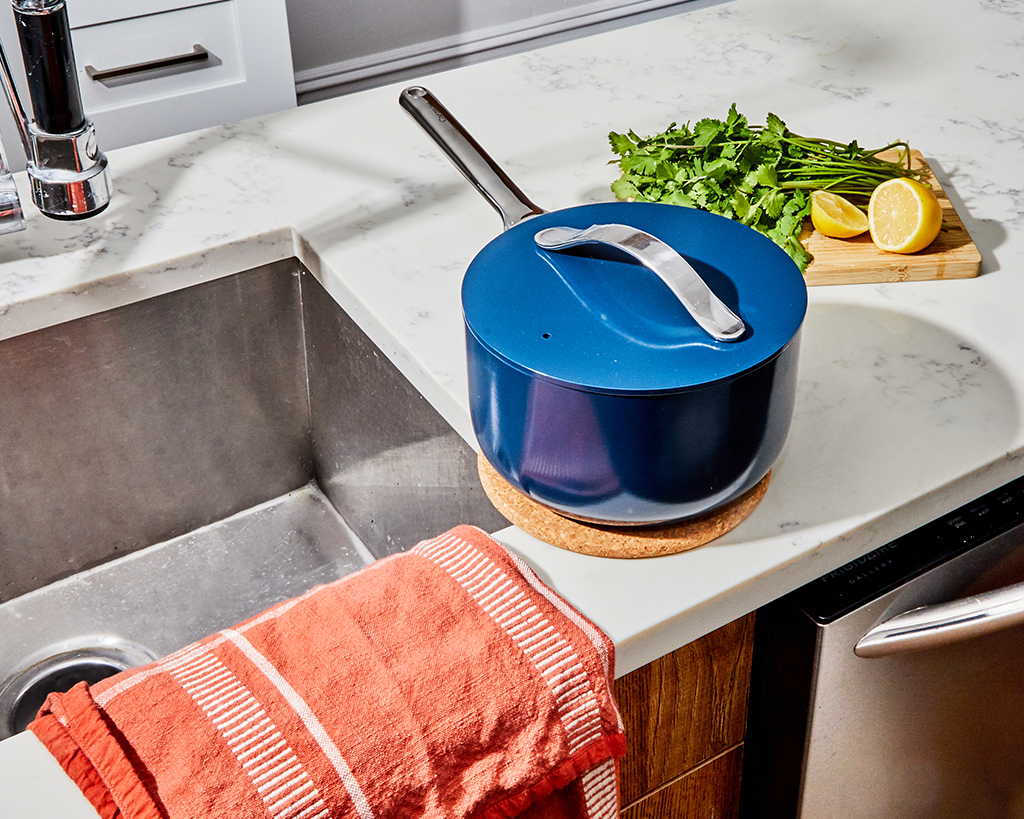 Let’s pretend you’ve read this article and decided it’s time for a new set of towels, AKA, you now have a new set. Before using your new towels, it’s important to wash them to remove the silicone coating that has been added during production to protect the product. Without this initial wash, the towel will not function at its maximum absorbency or be soft to touch.

As our parents taught us, checking the label and reading the specific care instructions is always the way to go. Who’s guilty of assuming we already know or making a best guess and then being terribly wrong and ruining new linen? (We’ve all been there…) Remember that during the first wash, new towels can leak their color and transfer dye to other items in the washing machine; consider running a separate load for your new kitchen linens.

Once your towels are fresh, clean, and ready for use, let’s keep them that way by always setting them back to air dry. Leaving your towel crumpled on a counter or in a pile on a chair is a recipe for bacteria growth. Bacteria thrive in warm, wet environments, so it’s also better to hang them out to dry to ensure they get proper air circulation. A special drying rack, hook on the wall, or over the oven door handle will work well.

Serious talk for a second: as tempting as it may be to buy cheap kitchen towels (with the idea of using then discarding them often), don’t do it. Cheap towels are, well, cheap, but this is about their only selling point. Cheap towels are usually smaller, thinner, and made from a lower-grade material. This results in them doing a particularly bad job at the function they’re supposed to serve, and they also look ugly while doing it. Oh, and cheaper towels are likely to leave lint on your counter, cutlery, and dishes, too.

Kitchen towels always save the day, even when we don’t realize all the ways they serve us. Invest in a quality set of kitchen towels that will work as hard as you do, and always keep them close by.

In The Kitchen With Nic Scheppard & Jenson Titus of @VeryGayPaint